The provincial textile town of Almelo (eastern Holland), where Herman Krikhaar grew up in the 1930s, was not known for its interesting artistic offerings. Even in the warm, Catholic, humorous family, where their days were occupied with running the bakery and raising eight children, art was, understandably, hardly on the agenda. Nevertheless, Herman was fascinated by art from an early age. He bought postcards with images of works by Van Gogh and Rembrandt, and visited, as often as he could, a local painter, Anton Scheerders’ studio, watching how he copied Rembrandt’s ‘Night Watch’ in large format. Intuitively, he began to master techniques by copying (Diderot’s portrait of Fragonard) the most diverse examples: a work of art, a romantic Swiss landscape, or a mustached guitar player: the result was astonishing every time. His mother commissioned him to paint pictures of his ancestors’ houses, where he already showed his understanding of perspective.

After having been accepted to the Arnhem Art Academy (1947), where the traditional methods of copying old plaster heads and still lifes were rigidly adhered to, his enthusiasm for painting dwindled. The most important experience that the Academy gave to Herman was the friendship with a slightly older peer, Theo Wolvecamp. But Wolvecamp left the Academy – also disappointed – within a short time for Amsterdam, where he shared a flat with Karel Appel in the long Leidsedwarsstraat. There, Herman met Karel even before the CoBrA adventure began.

When Herman was called up for military service, he allowed himself to be distracted from art for another year and a half. But then he took his fate firmly in his own hands and left for Paris, where he scoured the antique markets in his spare time. Here, his clever mercantile spirit (buying was a game to him) was greatly stimulated, as was his keen eye. He discovered drawings by Rodin and Signac, among others. This also sparked his mania for collecting, which intensified a year later when he started working for KLM and travelled around the world.

He soon focused on two specific areas: archaeological art objects from the Middle and Far East, alongside contemporary art with a preference for CoBrA works. He also bought many art books in those years and taught himself basic, art history knowledge, which was very thorough and broad. The few works of art he created during this time were mostly impressions of his travels, rather traditional and very ‘fifties.’

After having flown for KLM for eight years, in which time he had built up a considerable collection and had got married, Herman found it was time to pick up his brushes. At the end of the fifties, he and his wife, Jetty, left for Ibiza. Then, it was still an unspoilt island that was in the midst of being discovered by: Spaniards who wanted to escape Franco’s grip, (international) artists, and conscientious, American objectors.

They rented a small fisherman’s house where Herman could really concentrate. He began with realistic Ibiza village views, which soon became abstracted. After that, human figures appeared in his work, as well as Sputnik, which he saw passing by. Here, his subtle sense of colour stands out, and, in some of his works, an unparalleled poetry can be seen.

But after a year, things changed: a child was on the way. Back in the Netherlands, he opened Galerie Krikhaar (May 1963), which would keep him completely occupied for the next few years. During this period, he closely followed international art developments – was in Paris every month – and derived much satisfacation from the exhibitions he put on and the success he achieved.

Unfortunately, his marriage (with two children) broke up at the end of the 1960s. He found himself painting again. He rented a studio in the South of France and, in the following years, he would find a balance between revelling in the exciting and lively art world and retreating to the South in the summer months to paint. In those intensive painting periods, the well-known, successive, and increasingly bold series emerged (Space, Dreams, Fashion, Garden/Landscape, Van Gogh, Dance) on ever growing canvases (2 x 3 metres).

In 1989, when Herman’s life was in an interim phase, he started making bronzes. Although he achieved very satisfying results, he found the process too labour-intensive. At that time, he also starting making ‘objet trouvé’ works, a combination of materials, objects and textures: he loved to give free reign to coincidence, as it always accompanied the best moments in his life. 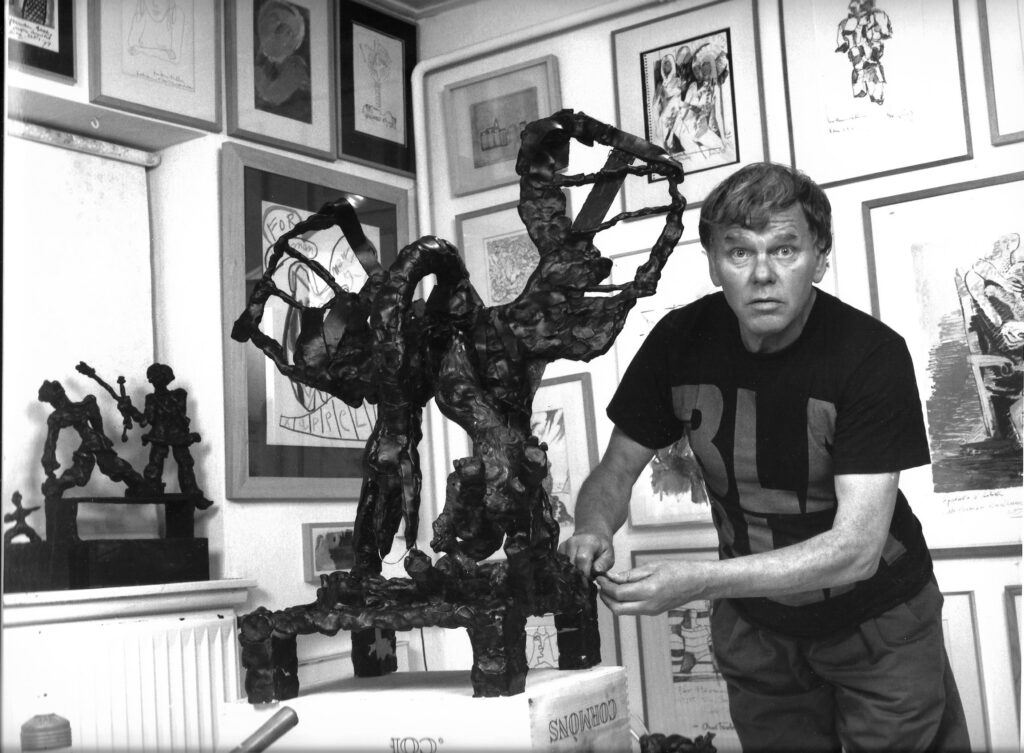 When he moved to his new studio in the South of France in 1994, he turned to a – surprising – classical and religious theme. He created a twelve-part series of three panels on the theme of crucifixion, but with a contemporary point of view: “Why is it always men who hang on the cross?” So here the woman – and Herman much preferred to paint naked women! – must pay the price.

For the next sixteen years he continued to push boundaries. Although he explored new materials and possibilities, he continued to paint (another large series of 2 x 3 metres) and began to draw in abundance, filling large stacks and books. With drawing, he felt at ease, as the speed was synchronous with his thoughts, feelings and fantasies, which he could direct in whatever direction he wanted to go. Especially in the last few years, there was a continuous stream of gouaches, collages and drawings, on which he worked with incredible pleasure.

Krikhaar’s work is a sort of condensation, a brief summary of the real, containing everything life needs to appear, biological life as well as life of the spirit, life with no beginning, middelen or end. Life which has only the present – in both senses of the word: the present time and the present as a gift. A certain strength, a certain faculty of attention. A presence in the word searching for its full existential meaning.